On Thursday, 18th and Friday, 19th January the 6th Schedler Music Summit went off without a hitch in snowy Steeg am Arlberg. More than 160 industry representatives were in attendance, despite the bad weather and road conditions.

The previous 5-day Pop & Schlager Songwriter Camp, with over 40 authors and producers from Nashville (USA), Sweden, the Netherlands, Germany, Switzerland, Denmark and other countries, consisted of 11 teams and took place from Sunday (1/14) to Thursday (1/18). The highlight of the camp this year was the first ever “Black Eagle Cafe Open Mic Night”. Inspired by the famous Bluebird Cafe in Nashville, some of the 40 singer-songwriters performed their own songs at the “Black Eagle Cafe Open Mic Night” in the Schwarzer Adler hotel (in Hägerau, Steeg). As part of the camp program it was a huge success! The camp then merged into the industry get-together, Schedler Music Summit.

On the first night of the summit, the authors of the Pop & Schlager Songwriter Camp were in the spotlight again after a recap of the successes in year 2017, and a number of songs, which were created in the preceding days at the camp, were presented. Here, Schedler once again showed its musical diversity (from German pop to international dance pop to Schlager), and proved again that it puts no limitations on music – “It’s all about the song.”

The evening ended with the song “Wir sehen uns wieder” (“We will meet again”), produced during the camp, and a group photo of all the camp participants as well as the Schedler Music team. The program on the 2nd day of the summit was again “Snow & Fun“, but the heavy snowfall threw a wrench in the summit organization team’s plans. Instead of going skiing at the largest ski resort in Austria or the planned winter hike to Körbersee (named Austria’s most beautiful place in 2017), an alternative program, which consisted of sledding and a “look behind the scenes” at the Arlberger ski operation, was conducted. Immediately after the “Snow & Fun” program, Schedler Music invited everyone to the ski lodge Steffisalp for the second time under the theme “After-Ski Party”, where 6 bands and performers, including Tagtraeumer, Thorsteinn Einarsson, Loren Nine, Vincent Gross and Männer der Berge, gave first-class performances. The party continued late into the night.

Quote from Rudi Schedler: “A huge thank-you to all the songwriters, industry colleagues, and my entire publishing team. The songs created have the potential to be big hits! In cooperation with our constantly growing industry network, we will thus achieve strong publications in 2018.”

All information can be found at: www.schedlermusicsummit.com 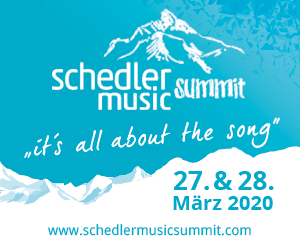